In classical percussion what interests me most are sonic niches, sounds and instruments not commonly heard and unusual playing techniques. I have been drawn towards sonic experimentation ever since I can remember and that's why I started playing contemporary classical music predominantly soon. But of course also ancient musics offer great liberties where I can make use of my rather special instruments.

In the following I will give short descriptions of the different types of instruments I play besides the classical percussions. Some of the more special items are described individually. 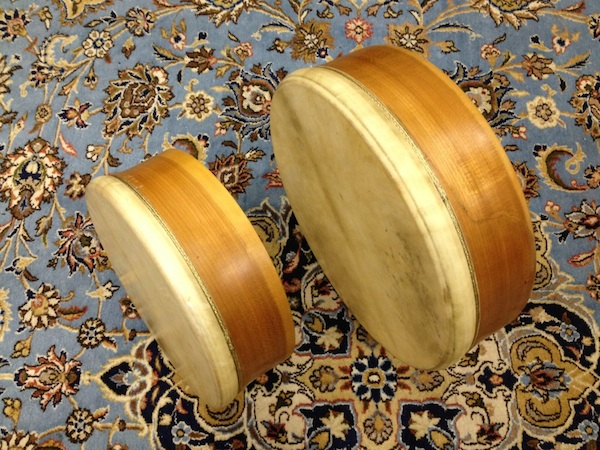 Frame drums are among the oldest instruments known to mankind. I play many kinds of frame drums, from smaller handheld ones that you can play standing, walking or dancing up to large drums played resting on the thighs (this is what is called lapstyle frame drumming). My two main makers are David Roman Drums (David Faulwasser and Roman Dill in Berlin) and Cooperman (Vermont, USA).

(Iran, Helmi, Davood Radman and others) 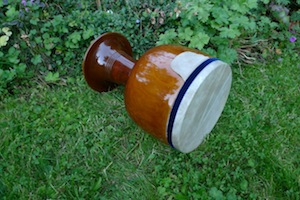 The Persian (Iranian) Tombak (also known as Zarb) is the chief percussion in classical Persian music. Its playing technique is extremely rich, producing a wide palette of sounds. This makes the Tombak a very versatile instrument that blends well with many instruments and musical styles.
The drum pictured here was lathed by Davood Radman and then finished with a french polish (shellaque) by myself. 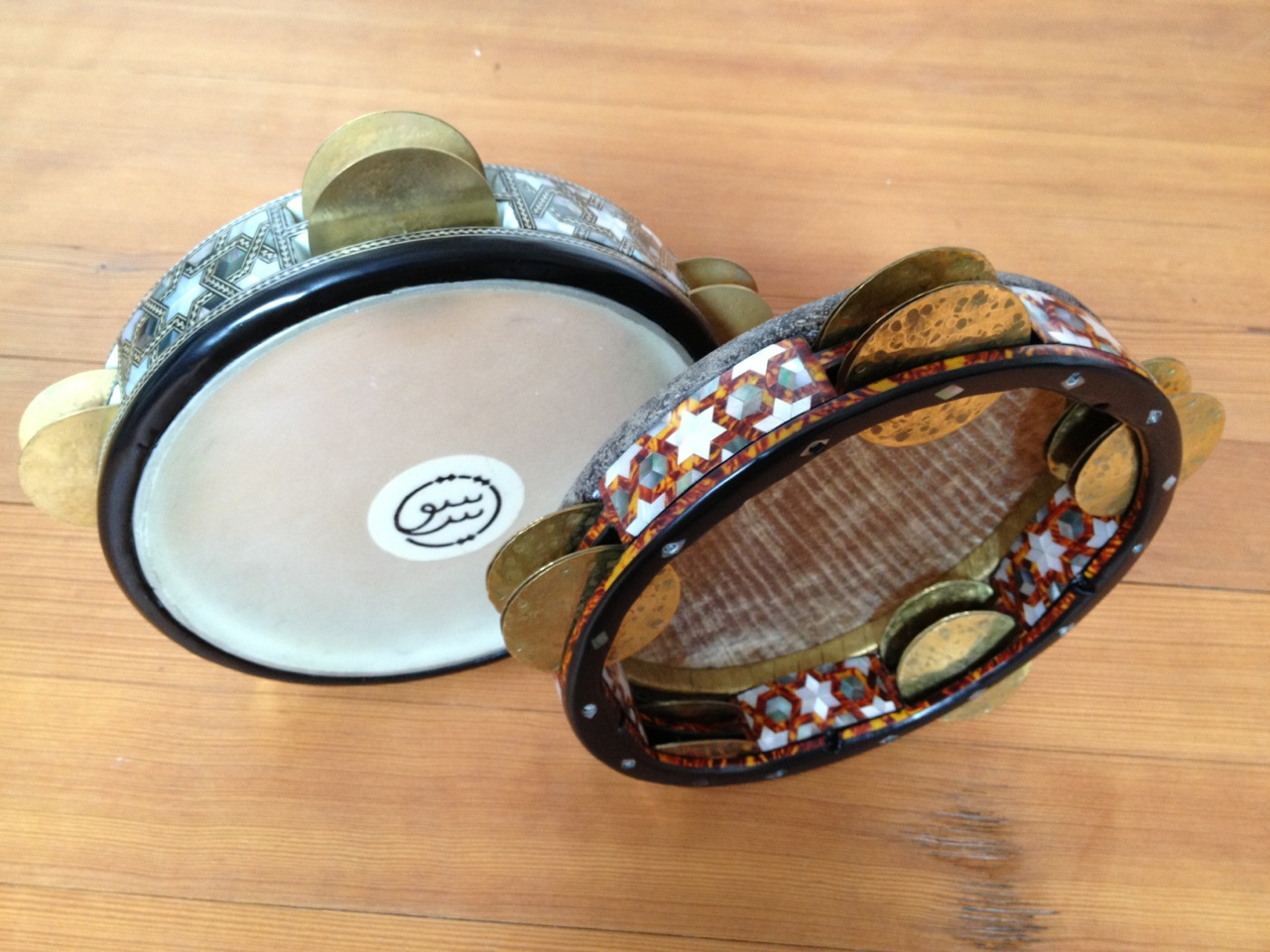 two exclusive Riqs: in the back a Riq entirely built by myself, inlaid with mother of pearl and wooden inlay strips, in front a custom ordered riq for a drummer in the US built by Lev Elman and inlaid by Titus Bellwald with mother of pearl and celluloid.
The small tambourine Riq is the chief drum in classical Arab music. Its dynamic range and broad spectrum of colours are amazing. There are two main playing positions producing quite different sounds: in "classical" or "skin" position both hands are holding the drum with the fingers placed on the skin. Thus the sound is a dry one. For open sounds the fingers have to be lifted off the skin. In "Cabaret" or "jingle" position one hand holds the drum – it can shake the drum and play the jingles like castagnets – while the other on plays both skin and jingles. You can hear both positions being used in the audio example.
My Riqs are built by Nakhle, Kevork, Lev Elman and myself. 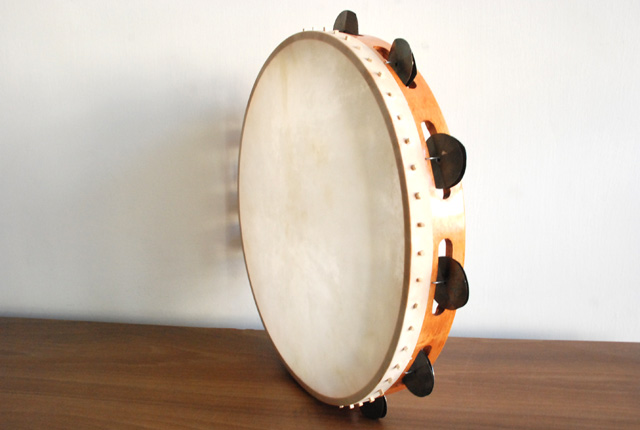 Photo: La Bottega della Tarantola, Gian Piero Donno
The Tamburello is the Italian variant of the tambourine. It's usually a jingled drum but there are also types with no jingles called "tamburello muto" ("mute tambourine"). Almost all regions of Italy know their own styles of playing the Tamburello and have different techniques. A common denominator is though the triplet based micropulse and playing multiple strokes in one fluid motion. I studied both traditional and more contemporary styles of playing Tamburello with Roberto Chiga and Andrea Piccioni and play Tamburelli predominantly in Ancient music (usually for dances).

(Turkey, China, Nepal and others) 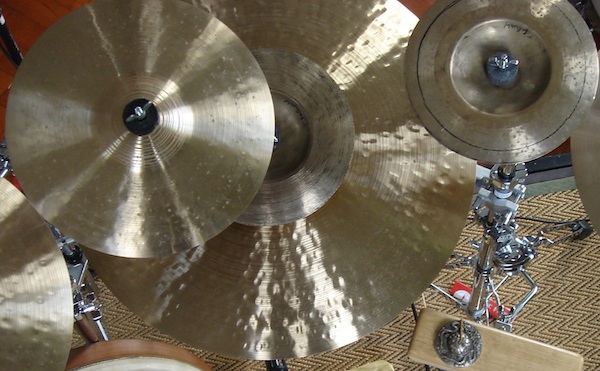 Cymbals were introduced in Europe via the Janissaries. These troops of the Ottoman empire had riding musical corps with various instruments and their percussion section was replicated in European orchestras in the 18th century. Not only were cymbals added then to the western orchestra, but also the bass drum and triangle were part of the turkish percussion section. Today Turkey is still the origin of many exquisite cymbals. But there are other styles of cymbals than turkish ones - Asian cymbals come in many different shapes and produce sounds often much different from turkish ones. While drums tend to have a short sound with much attack, cymbals, bells and gongs usually reverberate for much longer times. So they can open another sonic universe as contrasting sounds. 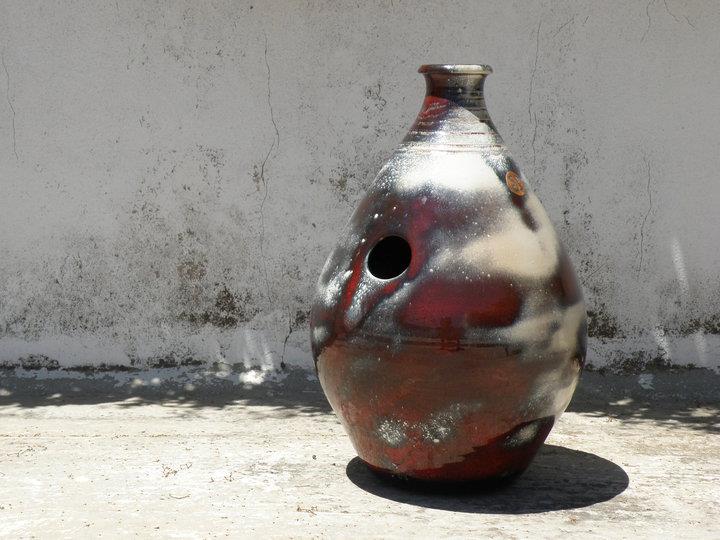 Photo: Descarga Percussion by El Greco
The Udu originates from western Africa. Basically it's a clay jug used out of context. There is one important detail though: the Udu has a second opening on the side – when this opening is covered with a hitting hand the air inside the Udu vibrates producing a low sound. The clay produces very contrasting high frequencies when played. The bass sound is very poor in overtones, so to hear it in the audio example you have to use speakers/headphones that can reproduce bass frequencies well below 100Hz.
I play Udus by Terre et Son and Descarga Percussion.

The term "Baroque Timpani" refers to kettle drums without any central tuning mechanism – it's not only used for instruments from the baroque musical period but also applies to timpani commonly used well into the 19ths cantury. Compared to modern symphonic timpani, the baroque timpani usually have more shallow (often rather hemispherically shaped) bowls with smaller diameters in relation to the note they're tuned to. The heads were usually mounted directly onto the tuning rings. Separate "flesh hoops" just for the skin only became standard in the 19th century.
I own three different sets of baroque timpani: 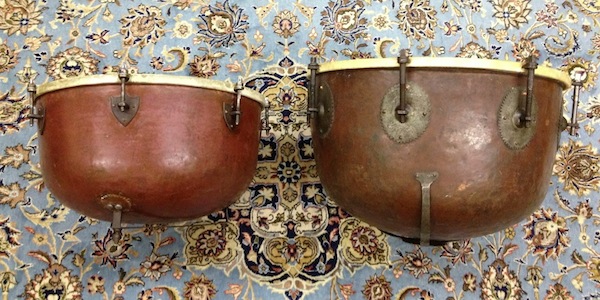 The "small" drum (still 60cm diameter) was found by a harpsichord maker from Bremen, Germany. The drum has a huge "schalltrichter" (cone) inside. Its 27cm diameter top is shaped like a cymbal and resonates audibly when the drum is played. The large drum is with 66cm diameter quite a big instrument for the period. The bowl is sunk deeply and hammered to great thinness. This set is used mostly for works by Händel, as he had sometimes used the "Tower Drums", a pair of kettle drums in the London tower that were said to be of enormous dimensions (this is much debated and as the drums were distroyed in a fire their actual size remains unknown). On this set goat skins from Austrian tanner Edlauer are mounted directly to the hoop. 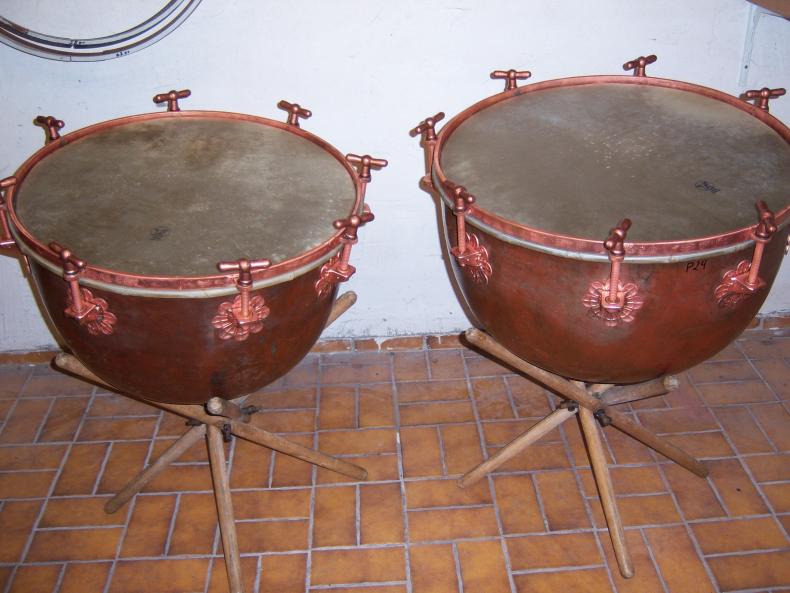 Made around the middle of the 19th c. in the workshop of C. W. Moritz. The bowls bear a stamp of this famous German wind instrument manufacturers. The tuning screws are unusually distributed: the distance from one screw on each drum to it's neighbours is smaller than with all other screws. It seems that hoops made for larger drums were cut open at this place and resized to fit this set. This would mean that they were made in a hurry and had to be ready for a special event which could have been the visit of the Russian Zar to Berlin in 1838. The drums were completely overhauled in 2009 by Berlin timpani makers Winkelmann. 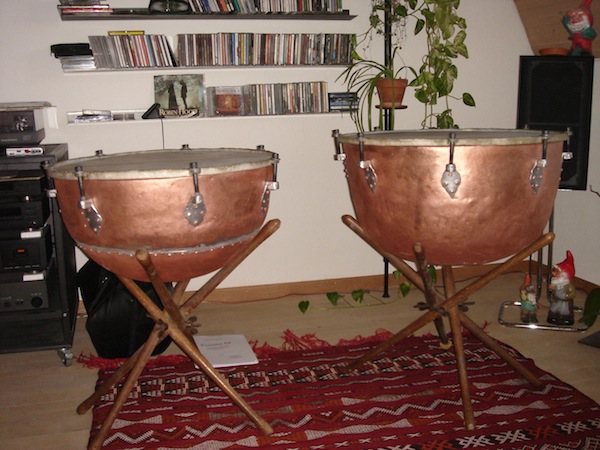 These drums have obviously been played for centuries and were repaired many times. Of the legs that were originally found on these drums only the rivets remain on the bowl of the larger one. On the small one the whole inferior part of the bowl was neatly replaced (the drum must have suffered great damage from falling down). Probably in the 20th c. the tuning screws were replaced with T-handled ones and new threads were welded onto the lugs. Many layers of paint covered the bowls (see image). The "schalltrichter" (cones) found inside the bowls are much younger than the drums themselves as thy are made from indutrialy rolled copper sheet. The top image shows the drums in their state after restoration. Low profile, key operated screws have been installed once more and goat skins from Edlauer are mounted directly onto the tuning hoops. The bottom image shows the state of the drums before restoration.

on the "lessons" page you can find information on my teaching activities.All instruments described on this page here you can study with me. Get in touch for further information or to arrange for your next lesson.